After years of prodding by FreeGovernmentCellPhones.net the Federal Communications has finally fixed one of the major flaws in the Lifeline Assistance program. Until now the homeless, perhaps the neediest of Americans, had been intentionally (and stupidly) declared ineligible for this program designed to help the needy. 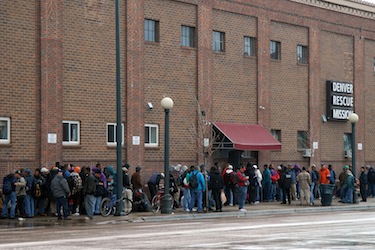 Now the homeless and others in shelters can get free cell phones.

But now the FCC has announced several changes to correct eligibility problems and made millions of additional Americans eligible for free government cell phones.

The FCC announcement said, “… [W]e adopt a requirement that, prior to providing service to a consumer, an ETC must obtain that consumer’s permanent residential address, unless they only have a temporary address.”

They continued, “… [W]e codify additional protections to be implemented by those ETCs that serve consumers without a permanent residential address, in order to assist ETCs in more easily verifying such consumers’ continued eligibility for the program.

Please allow us to translate that into English from the arcane language used by bureaucrats: The rules have now changed so that temporary residents of homeless shelter, women’s shelters, veterans shelters and any other multi-family address can now use the shelters’ addresses to qualify for a free government cell phone. This is, of course, excellent news for incredibly needy, incredibly vulnerable Americans. The only caveat is that residents of temporary shelters must re-verify their temporary residence address every 90 days.

But the good news just keeps coming. The FCC announcement also said, “… [R]ecognizing that there are instances where multiple households (i.e., families) reside at the same address we implement procedures to enable applicants in such circumstances to demonstrate at enrollment that other Lifeline recipients residing at the same address are a separate household.”

In other words, in these terrible economic times, when multiple families often share expenses by living together in one home, both families will now be eligible for free government cell phones.

The FCC retained some restrictions, however, in order to protect the program against fraud. They said, “Lifeline applicants will not be permitted to use a P.O. Box address as their Lifeline address. We are concerned that some subscribers could list a P.O. Box as their address in an effort to avoid complying with our one-per-household requirement.”

The new FCC rules constitute a major victory of FreeGovernmentCellPhones.net, its readers, and needy Americans. We congratulate the Federal Communications Commission for making these long-needed rule changes.