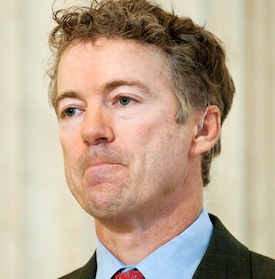 Five bucks says the government pays for his phone

Here we go again. United States Senator Rand Paul, a Republican from Kentucky who’s dedicated himself to cutting the deficit and government spending, gave a speech in which he mistakenly blames the “fiscal cliff” on the free government cell phone program.

“They offer you baubles,” Paul said while describing politicians like President Obama at the 10:00 mark in this video. “They offer you something for free: ‘Here’s a cell phone. Just take the cell phone and vote for me, it’ll be okay.’ Here’s the problem: It’s not free. On the one hand, you get the free cell phone; on the other hand, you get four dollar gas. On the other hand, you get the price of food rising. Why do prices go up? Because we run a deficit up here giving you free stuff, and then we print up money to pay for it and that steals value from what you have.”

Although Paul didn’t offer any specifics, he is obviously referring to the recent video in which an anonymous Ohio woman raved about “the ObamaPhone”.

We beg to differ, Senator Paul. And we urge you to learn more about the Lifeline Assistance free government cell phone program. You’ll discover that it’s one of the most cost effective programs that’s ever come out of Washington, DC.

So please, Senator Paul, take another close look at how valuable the Lifeline Assistance free government cell phone program really is. If you do, we’re confident that you’ll change your mind and become a supporter.