Lifeline Assistance, the program that’s become famous for giving out free government cell phones and infamous for handing out ObamaPhones, is expanding and upgrading. And that’s very good news for its current and future customers. Because instead of giving its customers basic cell phones, Lifeline companies will soon begin offering internet-capable smartphones.

Although Lifeline has now helped an estimated 20 million low-income Americans, there have been complaints — lots of complaints — that the refurbished phones have been cheap, relatively “featureless” models. That’s to say, they allowed its users to make phone calls and send text messages, but didn’t offer any internet capability that’s become so vital in today’s increasingly wired world.

What brought about this significant change? Like any good consumer goods company, the Federal Communications Commissions (FCC) took a close look at what its customers want, need, and request most often. They analyzed the results and voted that the Lifeline program should begin offering internet-capable smartphones and mobile internet plans. They also ruled that the program should begin in 2014 (or as soon as practically possible). As a result, some people say that the free government cell phone program should be renamed the free government internet phone program.

The simple fact is that everyone — absolutely everyone — who qualified for a Lifeline cell phone will now qualify for a government internet-capable smartphone.

We can already hear some folks saying, “Sure, I qualified for a free government cell phone, but I probably won’t qualify for one of these new internet smartphones.” We completely understand why you might think that’s the case, but it’s not true. The simple fact is that everyone — absolutely everyone — who qualified for a Lifeline cell phone will now qualify for a government internet-capable smartphone.

And just to review, you qualify if your household earns less than 135% of the U.S. poverty level (or 150% in some states). Others who may qualify include families who currently participate in another government aid program such as the following, or many state-specific programs:

Is the upcoming government internet-ready smartphone program a sure thing? A simple analysis of the FCC’s recent moves says an emphatic yes. Here’s what we mean:

Step One: Back in 2012 the FCC revealed their blueprint for the program’s expansion.
Step Two: As you read this, a pilot program is underway in which the leading Lifeline cell phone companies are testing free smartphones and free to very low-cost internet programs in test markets.

In other words, get ready. Here it comes.

How we got here

Back in 2008, Lifeline Assistance rolled out its Lifeline program in Tennessee. Over the course of the last eight years the program has gained momentum and customers and partner companies and it now serves 44 states, Washington DC, and Puerto Rico.

Critics say the program grew so quickly that it outstripped the FCC’s ability to prevent fraud and waste. As a result, this remarkably successful program has earned more than its fair share of critics who demanded reform, and enemies who demand an end tothe program. The FCC reviewed the progam and approved the Lifeline Reform Order (http://www.fcc.gov/document/fcc-reforms-modernizes-lifeline-program-low-income- americans-0%0A) in an effort to eliminate fraud and reduce costs by nearly $1 billion per year. (To be strictly accurate, the savings are estimated at $2 over three years, but we’re comfortable with rounding off to the nearest billion when the numbers get this big.)

That’s where the FCC had a stroke of genius (something critics of government would call an oxymoron). They announced that they would redirect those dollars to test the concept of evolving the government cell phone program for needy Americans into a government internet program.

The relevant section of the FCC order said:

“Consistent with previous efforts, we act here to eliminate waste and inefficiency, increase accountability, and transition the Fund from supporting standalone telephone service to broadband.”

Broadband — the magic word in the FCC’s vocabulary. There’s nothing they want more than to bring high-speed broadband internet service to the masses. As the French say, it’s their raison d’etre, their reason for being.

The FCC is already working on other programs with a similar goal. Programs such as Internet Essentials from Comcast, Internet Basics from CenturyLink, and Connect2Compete from an association of public, private and non-profit organizations, has been up and running for more than a year now. All three programs (not to mention numerous other regional and local programs) has been similar to this new FCC initiative            – to bring high-speed internet to low-income Americans. The biggest difference is that those programs charge customers a nominal fee each month, but the LifeLine internet-capable smartphone and service has the very likely potential to be free.

But let’s go back to the FCC order, because it clearly spells out what the public can expect from the expanded program:

“Using savings from the reforms, the Order establishes a Broadband Adoption Pilot Program to test and determine how Lifeline can best be used to increase broadband adoption among Lifeline-eligible consumers.”

Allow us to summarize: Root out waste and fraud in the current Lifeline cell phone program. Use the savings to expand that program. Provide internet to needy Americans who already qualify for free cell phones.

Any questions? Could it be any clearer?

Although we’re absolutely certain of the FCC’s intent, one thing is still in doubt: the final cost to the customer.

The test is still under way, so there’s no way for the FCC to “guesstimate” the final cost of the expanded program. But we have no doubt that the program will offer limited-use, high-speed internet plan at no cost, but also offer higher speeds and higher usage plans at additional, affordable rates.

The FCC’s pilot program and what it means to you

Let’s delve a little deeper into that pilot program we mentioned earlier — the one that’s testing the efficacy of free and low-cost internet smartphone programs.

The $13.8 million pilot project has been officially dubbed the Lifeline Broadband Pilot Program. It’s scheduled to be wrapped up by November 1 of this year.

The goal of the program is to test different programs in different markets to determine the most efficient, most effective way to bring cheap high-speed internet to low-income Americans. (A word of caution: They are also testing heavily-discounted programs, and while we believe a free plan will be available, it’s possible that there could be a low monthly cost. Regardless, we feel confident the smartphone will be free.) If you’re interested in more details, we explain the various options being considered here.

As the $13.8 million price tag implies, this is no insignificant test. The FCC and it’s privately-owned partners are taking a close look at 14 different projects in 21 states and and the Commonwealth of Puerto Rico. They’re testing both wired and wireless internet concepts, cable internet and DSL.

No matter which program wins, we predict the needy will also win

People who’ve heard of the pilot program often ask us for our predictions and we’re happy to oblige. 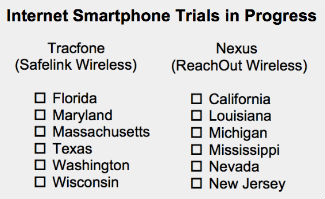 Two of the biggest players in the Lifeline free cell phone program — Safelink Wireless and ReachOut Wireless — are participating in the FCC’s pilot program. Both companies match up with the criteria we outlined in the previous paragraph, so we expect both of them to come up aces in the pilot program.

When we look into our crystal ball, we foresee a day in the not too distant future when America’s needy are given free government internet-capable smartphones and mobile internet service. It doesn’t take Nostradamus to see that this is a cost efficient evolution of the current LifeLine Assistance government cell phone program.

And since we’re making predictions, let’s make another one. If we had to guess, we’d bet that the first mobile internet package will include a no-cost smartphone (probably an Android) with unlimited talk and text and, a usage limit of 1-2 GB of data per month either for free or under $10 a month. Of course, if you need more gigs per month, we assume that users will be able to purchase additional gigs at a very reasonable costs.

The future is here

Our advice: Get ready, because the free government internet smartphones are coming. And they’re coming within the next year.

Find out more at CheapInternet.com, the world’s leading authorities on the free government cell phones and the upcoming free internet smartphones.