What’s happening to the Lifeline Assistance free government cell phone program? It’s losing customers left and right and in between.

The Federal Communications Commission recently reported that the number of subscribers has plummeted for the second straight year after years of rapid growth. 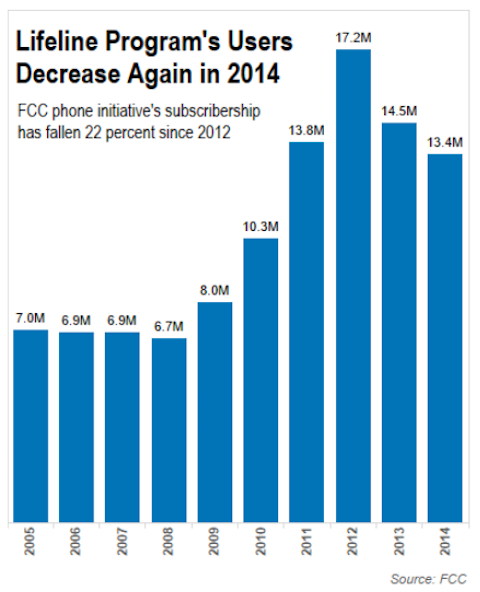 So what’ style cause of the drop? Is it an improving employment picture across the United States? Is it the fact that the FCC imposed far more stringent regulations in 2012 to cut down on fraud, waste, and abuse? Most likely, we’d guess, it’s a combination of those two factors.

… the report included no official agency explanation for the declining numbers, FCC spokesman Mark Wigfield said by phone Wednesday that the streamlining efforts three years ago played a role.

“Elements of the 2012 reforms have certainly contributed to lower subscriber numbers,” he said.

Before the FCC instituted the more stringent program eligibility regulations back in 2012, fraud, waste and abuse really were out of control. Many households received more more than one free government cell phone and numerous news stories highlighted unscrupulous individuals who had five, ten or even twenty free phones. In other words, the new rules were a very reasonable response to unreasonable fraud, theft and abuse within the program.

Another simple change put into effect in 2012 seems to have had a major impact on users. That change required users to recertify their eligibility annually. Prior to that rule, users had absolutely no motivation to give up their phones when their financial situation changed for the better. For example, if free phone subscribers landed jobs that lifted them out of poverty, they often kept their phones even after they no longer qualified for the program. As a result of the rule change we’ve seen those people giving up their phones rather than re-certify that they qualify for the free government cell phone program.

Subscriber numbers are going down, but the FCC is on the verge of introducing major changes to the Lifeline Assistance program.

For example, the government watchdog recently voted to expand the Lifeline free government cell phone program to include high-speed broadband service. law360.com says other changes designed to benefit consumers include, “…ensuring minimum service standards for both voice and broadband, changing who determines eligibility for the program and determining a way to increase the competition among providers.”

We’re not so sure. The national unemployment rate — the most widely quoted barometer of our nation’s fiscal wellbeing — has gone down to 4.9%. Many economic observers, however, believe that the numbers of being manipulated by political appointees in order to make things seem rosier in an election year.

But just as surely, there are other economic measures that present a different picture.

For example, business cable network CNBC seems to be among the doubters. In a report on the “real” unemployment rate, it said:

One of those figures is called the U-6 rate. Many economists look to the U-6 rather than the main unemployment rate (also know as the U-3). The BLS defines U-6 as “total unemployed, plus all persons marginally attached to the labor force, plus total employed part time for economic reasons, as a percent of the civilian labor force,” plus all marginally attached workers.

In other words, the unemployed, the underemployed and the discouraged — a rate that remains stubbornly above prerecession levels.

The U-6 rate dipped in September to 10 percent, the one bright spot of the jobs report.

Got that? The real percentage of people in the United States who are unemployed or virtually unemployed is really closer to 10%. But that’s not the end of the grim numbers for America’s poor.

America’s neediest citizens, those who depend on SNAP (the Food Stamp Program) are about to get unexpectedly whacked up the side of the head with a 2×4 and, therefore, need the free government cell phone program more than ever.

The Center on Budget and Policy Priorities explains some little known changes that are now coming into effect.

More than 500,000 and as many as 1 million of the nation’s poorest people will be cut off SNAP (formerly known as the Food Stamp Program) over the course of 2016, due to the return in many areas of a three-month limit on SNAP benefits for unemployed adults aged 18-49 who aren’t disabled or raising minor children. These individuals will lose their food assistance benefits after three months regardless of how hard they are looking for work. The impact will be felt in the 23 states that must or are choosing to reimpose the time limit in 2016.

Ouch. That’s going to hurt many of the same low-income Americans who desperately need a free government cell phone at the very same time that the program is being cut back.

We have often editorialized in favor of reducing fraud, waste and abuse in the invaluable Lifeline Assistance free government cell phone program. But it is incredibly shortsighted for one government policy to reduce the program’s budget at the same time that another government policy is increasing the number of people who need it.

We urge the FCC and officials of the SNAP program to compare notes and determine what’s really needed before issuing any new regulations that will harm America’s most vulnerable citizens.

Previous Post: 10% of Florida households receive Lifeline Assistance — even after the FCC cracked down on fraud, waste and abuse
Next Post: Companies dropping out: Trouble in the free government cell phone program?