A popular charge from detractors of the Lifeline/Affordable Connectivity (ACP) cell phone service is that illegal aliens can obtain a free phone. Is this true? The short answer is yes.

There is no citizenship verification in the application process for obtaining a cell phone from any of the vendors like Safelink, Assurance or enTouch. There is no mandate from the government that they must do such verification.

According to a 2007 report by the Center for Immigration Studies, 33% of immigrant-headed households use at least one major welfare program. And being on a just about any public assistance program such as food stamp, National School Lunch Program and others will automatically qualify you for a Lifeline phone.

Not only is there no verification of citizenship, but there is no verification of actual participation of being on any of the of the government assistance programs. All one does is check off on the application form (and they come in Spanish as well) which public assistance program the applicant is on. and swear under penalty of perjury that their statement is truthful, and they qualify. Considering the individual may already have broken immigration laws, they may not have a problem signing the signing the form. 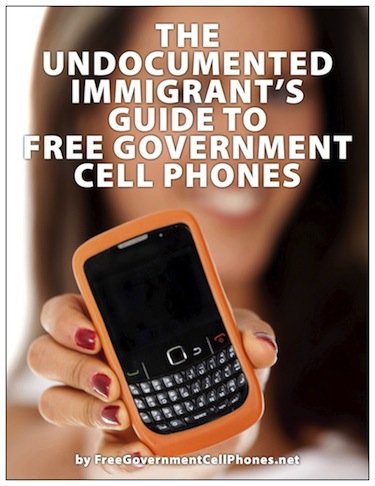 California is now giving food stamps to illegal aliens which means millions of them will automatically qualify or the Lifeline/Affordable Connectivity Programs in the formerly Golden State.

Social Security numbers are not required on the form.

An applicant can also qualify for the free cell phone by showing low income — if you have an income below 135-150% of the federal poverty guidelines<. All one has to do is show some documentation that proves employment, like pay stubs for example. Illegal aliens who work have pay stubs. There are millions of honest, hardworking American citizens who need this service, and we are most definitely not in favor of letting illegal immigrants get the free cell phones. As an attempt to show just how easy the loopholes are to get around, we produced The Undocumented Immigrant’s Guide to Free Government Cell Phones in hope that it could prompt new laws that would tighten up enrollment laws.

You can get more information on how to qualify for a lifeline cell phone from Lifeline and the Affordable Connectivity Program (ACP).