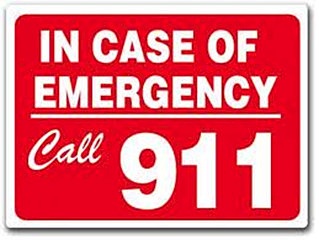 File this story under “Hard to believe, but true.” Any cell phone can be used to call 9-1-1 emergency service, even if your cell phone is old and you don’t have an active cell phone account.

Fact is, Federal Communications Commission regulations state that all cell phone providers – even free government cell phone companies — must take 9-1-1 calls from any cell phone. And that even includes old cell phones gathering dust in your closet or junk drawer.

You don’t need an active service contract nor a “live” phone number. You can use any old cell phone as long as its battery is charged.

However, here are a few things you should keep in mind:

Using your cell phone to make a 9-1-1 call might slow down the response time of emergency personnel.

Unfortunately, 9-1-1 technology was developed long before cell phones were invented. When you call 9-1-1 from a landline, the address of that landline quickly pops up so the dispatcher knows exactly where you are located. It doesn’t work the same way with cell phones because they are not tied to a specific address and your emergency may occur far from home.

“For instance, in Oakland, California, all 911 calls from cell phones are routed to the California Highway Patrol,” CNN reports. “That’s great if I’m reporting a car accident on the Bay Bridge. But it might not be as efficient if my house is on fire.”

In fact, the Oakland Police Department has issued the following advice, “DO NOT CALL 911 from a cell phone. When you call 911 from a cell phone, the call is routed to the California Highway Patrol (CHP). The CHP then has to reroute the call to your local police or fire dispatcher, losing precious time.”

Another potential problem is that since your cell phone isn’t linked to a specific address, dispatchers may be unable to pinpoint your location as rapidly as they can identify the source of a landline call. If your emergency takes place is a weak cell zone and you lose lose your connection, it may be impossible for emergency responders to track you down.

Consumer Reports observes, “Landline and VoIP 911 give the operator your home address, including an apartment number if it appears on your phone bill. With cellular, operators see only geographic coordinates.”

The report continues by saying, “With all phone technologies, the operator asked respondents for their location at the start of the call in at least three of every four calls, perhaps if only to verify the address on the screen on landline and VoIP calls. But if you can’t speak—if you’re incapacitated or distraught, for example—it’s clearly a huge advantage if your address automatically shows up on the operator’s screen.”

To sum it all up, you can call 9-1-1 from any old cell phone as long as its battery is charged. But it’s probably safer to call from a landline if you possibly can.